Designed for the next generation of large scale virtualized and cloud networks the Arista 7500R3 Series modular switches are the 3rd generation of the 7500R Series universal spine switches. They combine 400G and 100G density with internet scale table sizes and comprehensive L2 and L3 features. Advanced EOS features for network monitoring, precision timing, VXLAN network virtualization and EVPN are combined with extensive hardware resources with a wide choice of systems and line cards to support lasting investment protection. 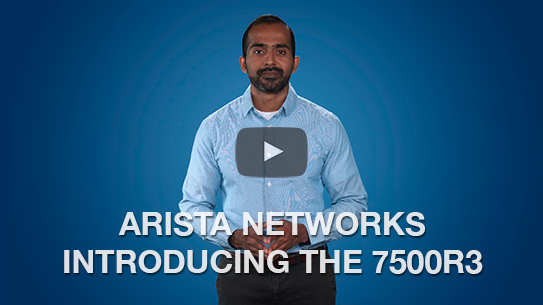 The Arista 7500R3 Series FlexRoute™ engine and EOS NetDB provides the scalability to support Internet IP routing scale with the low power consumption and fast convergence while scaling to millions of routes.

The Arista 7500R3 Series of modular switches deliver the industry’s highest performance with 230Tbps of system throughput to meet the needs of the largest scale data centers. With a choice of systems the 7500R Series provides four, eight or twelve line card modules, two supervisor modules, and six fabric modules. Designed for continuous operations and with system wide monitoring of hardware and software components, simple serviceability and provisioning to prevent single points of failure the hardware architecture supports high-availability with hot-swap of all components.

Available in a compact system design, as a choice of 12, 8 and 4 slot, the Arista 7500R3 Series enables a full range of wirespeed ports from 10G to 400G. It lowers total cost of ownership as it is designed to be efficient with power per port as low as 25W per 400G port which combined with front to rear cooling to optimize the data center environment produces the most reliable, dense and power efficient modular switch.

The 7500R3 modular chassis can accommodate a combination of the 7500R line cards providing a rich choice of density and speed:

The 7500R3 Series offer a broad choice of line cards with a choice of speed and density options up to 36 ports of wire speed 100G and 40G, or 24 ports of 400G. Every 400G interface supports a choice of speeds including 25G and 50G providing unparalleled flexibility and the ability to seamlessly transition data centers to the next generation of Ethernet performance.