The capabilities of existing networking technologies often miss, by factors or orders of magnitude, the network designer’s performance requirements. For many years, networks have been oversubscribed. Such oversubscription was tolerable in enterprise networks as the applications were not bandwidth intensive. However, this has now changed and is a glaring problem in datacenter networks. The primary reason for this oversubscription in datacenters is insufficient uplink bandwidth from each rack. Half the uplinks remain in Spanning Tree blocked mode, reducing the available bisectional bandwidth of the network by 50%. Arista’s MultiChassis Link Aggregation (MLAG) feature removes this bottleneck and allows the utilization of all interconnects in an active/active mode.

The network design below shows legacy architecture. Half of the Layer 2 uplinks are in STP blocked state, resulting in increased oversubscription in the network and also a higher price premium when you look at usable bandwidth per server. While Multiple Spanning Tree Protocol has been used to manually divide the traffic, such designs still do not offer the flat network that many applications require for all nodes to communicate to each other in a single VLAN. 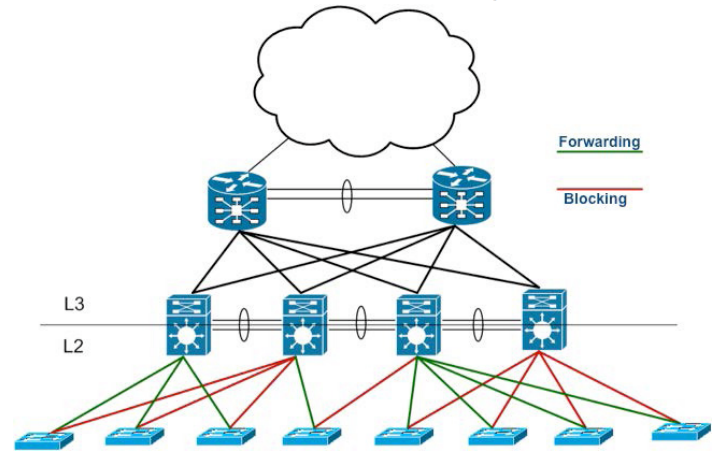 In order to utilize all interconnects in an active/active manner, Arista EOS now supports the MLAG feature. This allows one to interconnect two Arista 7000 Family switches and use them as one logical switch for the purpose of L2 protocols such as STP or LACP. Key Benefits of MLAG: 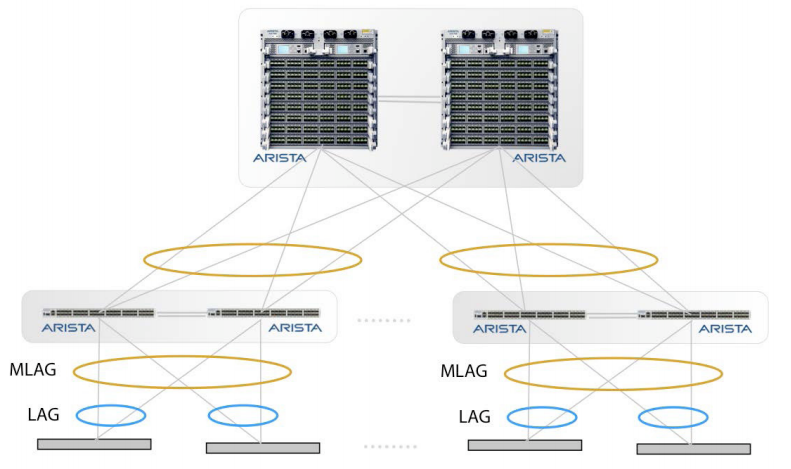 MLAG can be used at various places in the network to eliminate bottlenecks and provide resiliency.

At the leaf of the network, servers with multiple interfaces connect to the switches using NIC bonding, or standard Link Aggregation. With two of your leaf switches in an MLAG pair, you can now have active/active redundant connections from the server to the switches. The LAG groups can be formed using static link aggregation or LACP based negotiation methods.

At the spine layer, two Arista 7000 Family switches can form an MLAG pair and aggregate all of the uplinks from the datacenter racks. This eliminates Spanning Tree blocked ports and allows you to use the interconnect bandwidth on all ports. MLAG at the spine layer goes a long way in improving the Layer 2 scalability of your network, without increasing your cost.
MLAG can be used at various places in the network to eliminate bottlenecks and provide resiliency.

Data center and high performance cloud computing networks require both the highest level of network bandwidth and reliability. MLAG takes the benefits of link aggregation and spreads them across a pair of data center switches to deliver system level redundancy as well network level resiliency.

Arista’s MLAG feature allows you to scale at Layer 2 without wasting bandwidth in Spanning Tree Blocked mode. Any networking device supporting static LAG or IEEE 802.3ad LACP can connect to an MLAG pair. Now you can scale your network, without changing your topology.