An Introduction to the Arista 7130 E-Series

The Arista 7130 E-Series supports three Xilinx UltraScale™+ VU9P FPGAs in a one rack unit (RU) form factor. The UltraScale™+ series from Xilinx used in the 7130E devices are a significant step forward from previous solutions.

The 7130E Series offers a 48 port chassis, allowing clients to choose the right balance between port density and performance for their applications. Each device comes with a full Layer 1 switch fabric and contains a range of management and monitoring features including: per-port Ethernet statistics, monitoring telemetry and an x86 processor running MOS, ae Linux-based operating system, offering enterprise-grade device and application management.

When ordered with three FPGA's, there are multiple dedicated communication paths between the FPGAs and the Ethernet network offering flexibility and the ability to optimize communication latency. The characteristics described below refer to the 7130-48E variant (i.e.: 48ports, 1 RU device with 3 Ultrascale + FPGAs). 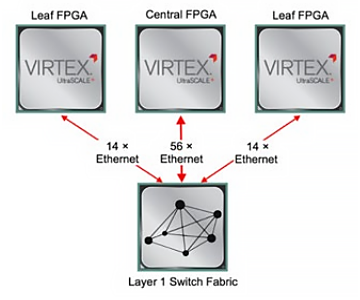 Moreover, the Layer 1 switch can replicate data from incoming ports to multiple destination ports. For example, incoming UDP/IP multicast data coming into the Layer 1 switch from the network can be delivered to multiple transceivers (if desired) on one, two or all FPGAs in ~3 ns. One or multiple links can be configured between the FPGAs' ports in any required combination. Any of the FPGAs can therefore communicate with each other, or any of the frontpanel ports via an Ethernet interface with a latency of ~50 ns (depending upon which MAC + PHY is used). 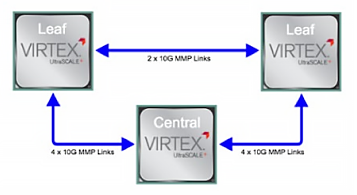 The 7130 E-Series parallel bus is a bus leveraging a large number of parallel IOs. Arista has released the Parallel Bus IP cores package allowing client applications to communicate between FPGAs with the absolute minimum of latency. The first IP core offers a unidirectional bandwidth of 10 Gbps per link and provides an AXI4-stream interface. 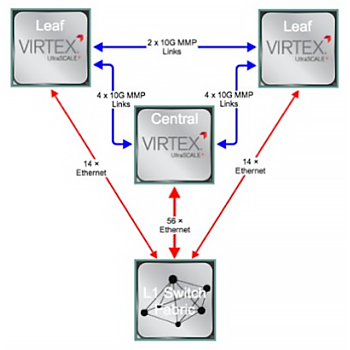 The visual latency breakdown below illustrates the latency differences (also refer to the graphic to the right) compared to a single FPGA reference. The latency benefits of inter-FPGA communication via parallel bus are significant in comparison to Ethernet.


In the following example, the latency savings of having FPGAs communicate locally via parallel bus links (~8 ns) versus having FPGAs on different devices communicating via 10GbE (~55 ns) are substantial. The parallel bus offers an 85% latency reduction compared to 10GbE. 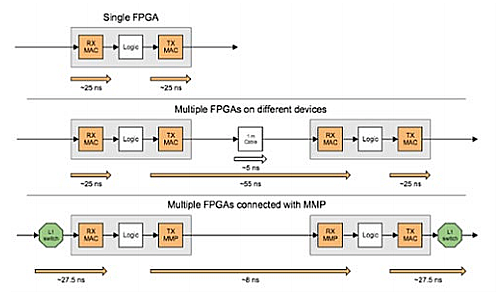 What About PCI Express?

Architecturally, this may be due to a lack of FPGA capacity. It is not always possible to run all the latency-critical code on the FPGA, with part of it having to run on the host. The current generation of Xilinx UltraScale™/UltraScale™+ FPGAs now has sufficient capacity to implement, in many cases, the entirety of the latency-critical portion of a transaction on the FPGA (or FPGAs in the case of the 7130 E-Series).

The non-latency sensitive part of the trade can still reside on the server but now communicate with FPGAs over the Ethernet network with a significantly simpler interface. There is also the added benefit that all communication between the FPGA and the controlling host can be monitored and timestamped as it traverses the network. This can be extremely useful to meet requirements such as record-keeping and compliance.