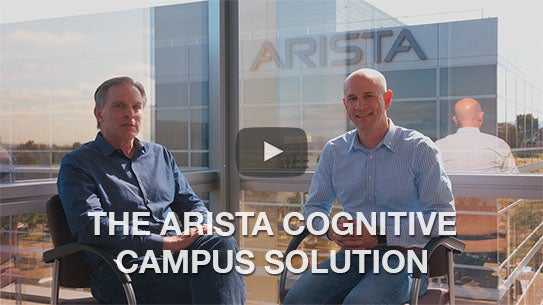 Arista’s Cognitive Cloud Networking for the Campus is based on three principles:

Cognitive Management Plane - There is a dire void in management plane consistency and a need for data-driven analytics in the campus, as in the data center. Arista believes that a common model can be applied across both, saving customers operational costs. The Cognitive Management Plane, based on Arista CloudVision is a data-driven repository for the automated actions across network analytics. Cognitive management applies artificial intelligence to identify the root cause of faults and to monitor user experience.

Securing The Campus - Securing the Campus spline requires a holistic approach to network segmentation, encryption, device compliance and auditing, as well as service integration with Arista’s security partners. Arista delivers these capabilities through EOS and CloudVision. Arista campus leaf switches provide non sampled flow analytics to CloudVision and third party consumers of IPFIX. CloudVision provides graphical representation of who is talking to whom and other flow information to simplify visualization of campus workloads.