Arista is aligning with industry leaders and customers involved in the real deployment and evolution of IP networking technology and infrastructure in media and entertainment.

Three key areas being addressed are: 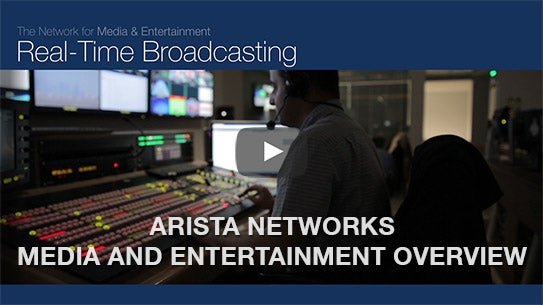 Arista is helping Media and Entertainment companies build high-performance infrastructure that meets today’s demands – while also providing the right functionality and performance for the evolution into next-gen media workflows. 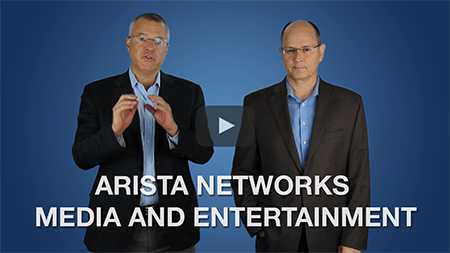 Many workflows in Media and Entertainment are file-based and involve the movement of extremely large media assets. These may include but are not limited to:

The clear trend is BIG DATA. Visual media is constantly growing in size, whether it’s 4K and 8K content, high frame rate, HDR, 3-D, etc. All of these enhancements of the visual experience create exponential growth in file sizes, and the need for bigger and faster storage.

This evolution in storage requirements has a corresponding impact on the network. It requires faster interfaces, line rate performance, low latency, and most importantly, big buffers!!

Storage almost always represents a fan-in of data flows and often includes speed changes (e.g., storage at 10GbE and compute nodes at 1GbE). Either of these situations require the network to buffer large amounts of data or packet loss will result. If packets do drop, then TCP responds by closing the window size and performance suffers. In addition, packet loss results in “badput” in the network whereby lost data is re-transmitted . And finally, data loss has a huge impact on latency, something that many media workflows cannot tolerate.

The Arista product family has solutions that include huge  buffers and sophisticated dynamic buffer sharing algorithms to support the most demanding file-based workflows. Whether it’s AVID ISIS or Harmonic Media Grid, Arista has tested and approved solutions that ensure optimal performance and scale.

Arista also supports a complete range of interface speeds – 1/10/25/40/50/100GbE – along with Quality of Service, large LAG scale and large-scale ECMP. All of which support a network architecture that can scale and handle wire-rate media workloads of the most demanding nature.

Real-time workflows are a requirement in the broadcast plant and other professional media environments. There is a tectonic shift taking place as workflows migrate from the existing world of HD-SDI to next-gen IP infrastructure in the broadcast plant, similar to the migration from PSTN to IP that happened in telephony over a decade ago. 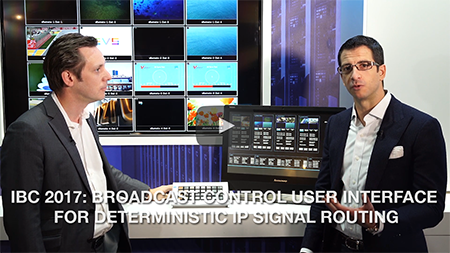 IBC 2017: Broadcast Control User Interface for Deterministic IP Signal Routing
At IBC 2017 Arista Networks and Lawo demonstrated the vsmSOUL extension of the VSM broadcast control and monitoring system, taking full control of the underlying Arista spine-leaf switch fabric. This approach leverages open-standard and follows the principles of the emerging AMWA NMOS Network Control specification. As a result, the solution provides an integrated, dynamic bandwidth reservation mechanism, allowing deterministic signal routing of the IP network. In the VSM control system, the IP infrastructure is represented as a unified matrix view of the network’s sources and destinations – alongside traditional base-band devices. Being the control system with the broadest third-party control capabilities, VSM is not only ideally suited for any native IP installation, but also provides full visibility and control of hybrid IP/SDI architectures. The Arista/Lawo solution is already deployed in large-scale broadcast networks throughout Europe and Australia. Control, scheduling, monitoring and deterministic signal routing is possible at scale today with Lawo’s VSM/vsmSOUL control system, IP nodes/edge devices from multiple brands and Arista Networks’ programmable IP fabric. 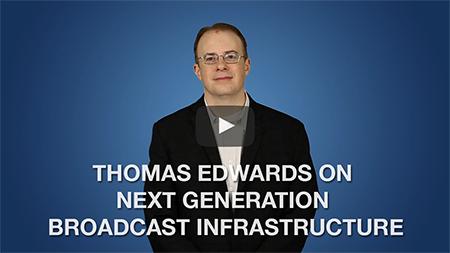 This shift is driven by many factors:

But real-time flows have very different network requirement and professional media has zero tolerance for outages, network latency and interruptions.

Arista is working with many industry-leading broadcast equipment manufacturers and broadcast customers to develop the right networking solutions to support this migration to a next-gen infrastructure. 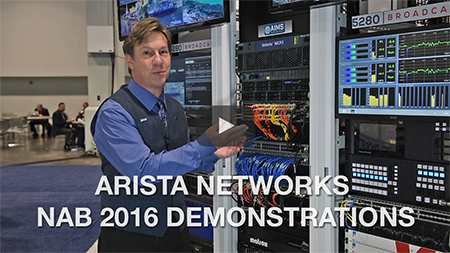 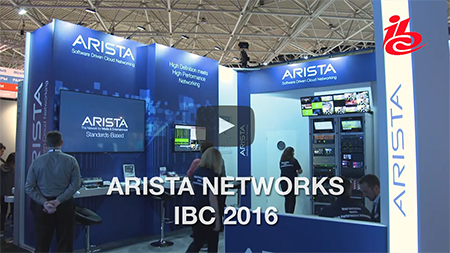 Check out the original video from IBC

Whether it’s Over-The-Top distribution or YouTube, there is no question that streaming content and rich-media content distribution is growing exponentially on the Internet. According to the 2H 2014 Sandvine Global Internet Phenomena Report, more than 50% of Internet traffic in 2014 was video-based.

This is causing content providers and content networks to re-think network design to handle the massive increase in volume, the need for global points of presence and agile deployment, reduce infrastructure and transit costs, and manage everything more effectively and pro-actively.

Arista has stepped up to provide industry-leading network solutions: